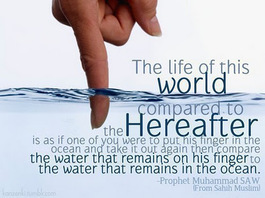 Quotes From Prophet Muhammad pbuh. and his Sahaba

Prophet Muhammad pbuh
A beautiful saying of the Prophet (pbuh) that will ensure the protection of our tongue. The Messenger of Allah (pbuh) said: "Whoever believes in Allah and the Last day, LET HIM EITHER SPEAK GOOD OR KEEP SILENT"


“The most excellent Jihad is that for the conquest of self.”
“The rights of women are sacred. See that women are
maintained in the rights assigned to them.”
“God enjoins you to treat women
well, for they are your mothers, daughters, aunts.”
- “Whoever doeth good to girls, it will
be a curtain to him from hell-fire.”
“Women are the twin halves of men.”
“A Muslim must not hate his wife and if he be displeased
with one bad quality in her, then let him be pleased with another that is
good.”
“Say what is true, although it may be bitter and
displeasing to people.”
“Can anyone walk through water without wetting his feet The
companions replied, 'No' Muhammad said, 'Such is the condition of those of the
world they are not safe from sins.'”
“Feed the hungry and visit a sick person, and free the
captive, if he be unjustly confined. Assist any person oppressed, whether Muslim
or non-Muslim.”
“Riches are not from an abundance of worldly goods but from
a contented mind.”
“A sincere repenter of faults is
like him who hath committed none.”
“He is not a perfect performer of the duties of
relationship who doeth good to his relatives as they do good to him. He is
perfect who doeth good to his relatives when they do not do good to
him.”
“They will enter the Garden of Bliss who have a true, pure,
and merciful heart.”
“Verily ye are in an age in which if ye neglect one-tenth
of what is ordered, ye will be doomed. After this a time will come, when he who
shall observe one-tenth of what is now ordered
will be redeemed.”
“The best of good acts in God's
sight is that which is constantly attended to although in a small
degree.”
“Every human being hath two inclinations - one prompting
him to good and impelling him thereto, and the other prompting him to evil and
thereto impelling him but Divine assistance is nigh, and he
who asketh the help of God in contending with the evil promptings of his own
heart obtaineth it.”
“The Lord doth not regard a prayer in which the heart doth
not accompany the body.”
“Prayer is the miraj (union with,
or annihilation in, the Divine Essence by means of continual upward progress) of
the Faithful.”
“A man is bound to do good to his parents, although they
may have injured him.”
“O Lord I make my complaint unto thee, of my feebleness,
the vanity of my efforts. I am insignificant in the sight of men, O Thou Most
Merciful Lord of the weak Thou aret my Lord Forsake me not. Leave me not a prey
to strangers, nor to mine enemies. If Thou art not displeased, I am safe. I seek
refuge in the light of Thy countenance, by which all darkness is dispelled, and
peace cometh in the Here and Hereafter. Solve Thou my difficulties as it
pleaseth Thee. There is no power, no strength, save in Thee.”
“O Lord grant to me the love of
Thee grant that I love those that love Thee grant that I may do the deed than
win Thy love make thy love dearer to me than self, family and
wealth.”
“Learn to know thyself.”
“The acquisition of knowledge is a duty incumbent on every
Muslim, male and female.”
“He who leaveth home in search of knowledge, walketh in the
path of God.”
“He who knoweth his own self, knoweth God.”
“One learned man is harder on the
devil than a thousand ignorant worshippers.”
“That person who shall die while he is studying, in order
to revive the knowledge of religion, will be only one degree inferior to the
prophets.”
“Seek knowledge from the cradle
to the grave.”

“The Kuran was sent down in seven dialects and in every one of
its sentences, there is an external and internal meaning.”
“He who is not kind to God's creatures, and to his own children,
God will not be kind to him.”

“Whoever is kind to His creatures, God is kind to him therefore
be kind to man on earth, whether good or bad and being kind to the bad, is to
withold him from badness, thus in heaven you will be treated kindly
“All God's creatures are His family and he is the most beloved of
God who doeth most good to God's creatures.”
“The greatest enemies of God are those who are entered into
Islam, and do acts of infidelity, and who without cause, shed the blood of
man.”

“Whoever is humble to men for God's sake, may God exalt his
eminence.”
“What is Paradise Muhammad replied, 'It is what the eye
hath not seen, nor the ear heard, nor ever flashed across the mind of
man.'”
“Hell is veiled in delights, and Heaven in hardships and
miseries.”
“God saith, 'Verily my compassion overcometh my wrath.'

“God saith, 'The person I hold as
a beloved, I am his hearing by which he heareth, and I am his sight by which he
seeth, and I am his hands by which he holdeth, and I am his feet by which he
walketh.'”
“God is gentle and loveth
gentleness.”
“Do not say, that if the people do good to us, we will do
good to them and if the people oppress us, we will oppress them but determine
that if people do you good, you will do good to them and if they oppress you,
you will not oppress them.”
“Thus saith the Lord, 'Verily those who are patient in
adversity and forgive wrongs, are the doers of excellence.'”
“Verily, each of you is a mirror to his brother then if he
seeth a vice in his brother he must tell him to get rid of it.”
“No man hath believed perfectly, until he wish for his
brother that which he wisheth for himself.”
“Ye will not enter
Paradise until ye have faith, and ye will not complete your faith until ye love
one another.”
“A Muslim who mixeth with people and beareth
inconveniences, is better than one who doth not mix with them and beareth no
inconveniences.”
“Refrain from seeing and speaking of the vices of mankind, which
you know are in yourself.”

“It is better to sit alone than in company with the bad and it is
better to sit with the good than alone. And it is better to speak words to a
speaker of knowledge than to remain silent and silence is better than bad
words.”
“The proof of a Muslims sincerity is that he payeth no heed
to that which is not his business.”
“Do a good deed for every bad deed that it may blot out the
latter.”
“The world is forbidden to those
of the life to come the life to come is forbidden to those of this
world.”
“When one of you becomes angry while standing, he should
sit down. If the anger leaves him, well and good otherwise he should lie
down.”
“People will not sit remembering God without the angels
surrounding them, mercy covering them, peace descending on them.”
“Do not consider any act of kindness insignificant, even meeting
your brother with a cheerful
face.
“Act kindly towards women, for they were created from a rib and
the most crooked part of the rib is its top. If you attempt to straighten it you
will break it, if you leave it alone it will remain crooked so act kindly
towards women.”

Hadrat Abu Bakr
*Allah will help him who moves in the way of Allah.

*Do not look down upon any Muslim, for even the most inferior believer is great
in the eyes of God.

*If you expect the blessings of God, be kind to His people

*There is greatness in the fear of God, contentment in faith of God, and honor
in humility.
.
*Be good to others, that will protect you against evil.

*If you want to control other people, first control yourself.
*Every day, nay every moment, try to do some good deed.

*He who avoids complaint invites happiness.
*Solitude is better than the society of evil persons

*When you seek advice, do not withhold any facts from the person whose advice you
seek
*Do not deceive or be faithless even with your enemy
*Intentions count in your actions
*God helps those who fear Him.
*He who prays five times a day is in the protection of God, and he who is
protected by God cannot be harmed by anyone.
*If anybody seeks your advice, offer right and sincere advice

*Use the same measure for selling that you use for purchasing.
Hadrat Umar
The Strength in action is, never to put of what you can do today
for tomorrow.
Don't
forget your own self while preaching to
others.

Avoidance
of sin is lighter than the pain of remorse.
Praise
God, for through praise, His blessings multiply.
“The less of the World, the freer you live.”
“May Allah bless the man who says less and does more.”
“Trust is that there should be no difference between what you do and say and
what you think.”
“Learn the Arabic language; it will sharpen your wisdom.”
“Sit with those who love Allah, for that enlightens the mind.”
Hadrat Ali
Do for this life as if you live forever do for the afterlife as if you die
tomorrow.
“A wise man first thinks and then speaks and a fool speaks first and then thinks
“Whoever educates himself and improves his own morals & character is
superior to the man who tries to teach & train others.”
“The best form of devotion to the service of Allah is not to make a show of it.”
“Do not be too hard, lest you be broken; do not be too soft, lest you be
squeezed.”

“You [humans] think that you an insignificant, while there is a great universe
contained in you.”
“He who busies himself with things other than improvement of his own self
becomes perplexed in darkness and entangled in ruin. His evil spirits immerse
him deep in vices and make his bad actions seem handsome.” 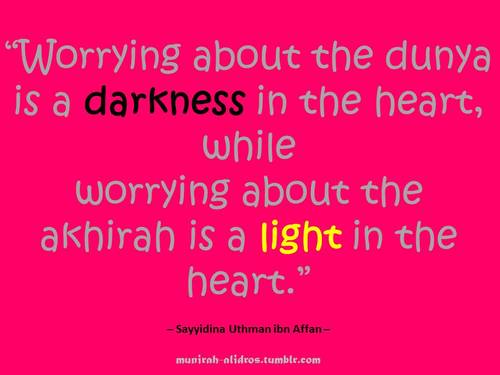