Use the Power Of Dua 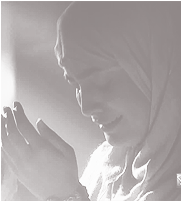 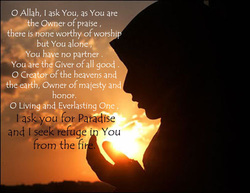 
When angry
A'uoozubillahi minas shaitaanir rajeem
Translation: I take refuge with Allah (SWT) from the accursed devil. [Bukhari and Muslim]

Asking forgiveness
Allahumma in nee as aluka yaa Allah (wa fee riwaayatin: billah) [al waahidu] as samad allazee lam yalid wa lam yoolad wa lam yakun lahu kufuwwan ahad- an taghfira lee zunoobee inn naka antal ghafoorul raheem
Translation: "O Allah! indeed I ask of You, O Allah (in one narration: by Allah), the One, the Only, the Absolute, Who begets not and nor is He begotten, and there is none like Him, that You forgive me my sins; indeed You are the Oft-Forgiving, Most Merciful. On this, he SAW said, He has been forgiven, he has been forgiven. [Abu Daawood, Nasaaie, Ahmad Ibn Khuzaimah; Haakim declared it saheeh and Dhahabi agreed]


Asking for success
Rabbanaa a tinaa fid dunyaa hasanah wa fil akhirati hasanatan wa qinaa azaaban naar
Translation: Our Lord! Grant us good in this world and good in the life to come and keep us safe from the torment of the Fire[Al-Baqarah :201]


Zikr
"Subhaanallahi wal hamdulillahi wa laa ilaaha illallahu wallahu akbar wa la haula wala quwwata illa billahil 'aliyil 'azeem".
Translation: Allah the Most Exalted, praise be to Allah, there is no God but Allah, and there is
no help except from Allah, the Almighty and the Great.


Remembrance of Allah
Laa ilaaha illallah
Translation: There is no true god except Allah


Upon leaving the house
Allahumma innee a'uoozubika an adhilla auw adhalla auw azilla auw uzalla auw azhlima auw uzhlama auw ajhala auw yujhala 'alaiyya
Translation: O Allah, I take refuge with You lest I should stray or be led stray , or slip or be tripped, or oppressed, or behave foolishly or be treated foolishly [Source, Abu Dawood, Tirmizi]


Waking up from sleep
Alhamdulillahi lazee ahyaanaa b'ada amaatanaa wa ilaihil nushoor
Translation: Thanks be to Allah who awoke us after our death and He is the only one that can resurrect us.


Seeing bad dreams
Alhamdulillahi lazee ahyaanaa b'ada amaatanaa wa ilaihil nushoor
Translation: Thanks be to Allah who awoke us after our death and He is the only one that can resurrect us.

Visiting the sick
As alullah al-'azheem rabb al-'arsh al-'azheem an yashfeeka
Translation: I ask Allah the Supreme, Lord of the magnificent throne to cure you


When there is bodyache
Aoozu bi'izzatillaahi wa qudratihi wa sultaanihi min sharri maa ajidu.
Translation: I seek the protection of Allah's Prestige, His Power, His Dominance and His Kingship from the evil of my pain.[Hasan and Tirmizi]


Asking Al-Jannah
Allahumma in nee as aluka bi anna lakalhamd, laa ilaaha illa anta [wahdaka laa shreeka lak], [al-manaan], [yaa]badee' as samaawaati wal ardh, yaa zal jalaa li wal ikraam, yaa haiyyu yaa qaiyyoom [in nee as aluka]
[al-jannata wa a'oouzubika minar naar]
Translation: "O Allah! Indeed, I ask of You, by the fact that to You belongs all Praise; there is no (true) god except You, [You alone, You have no partners;] the Bestower of Favours; [O] Originator of the Heavens and the Earth; O One that is Full of Majesty and Honour; O Living One, O Eternal One; [indeed I ask of You] [the Garden, and I seek refuge with You from the Fire].

Translation: Our Lord! Forgive us our sins and the lack of moderation in our doings, and make firm our steps and succour us against those who deny the truth. [Ale Imraan: 147] 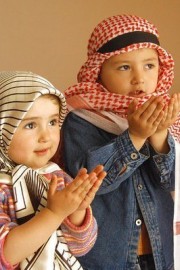 Many of us hold the view that why make dua to Allah, when He has already preordained all matters? Withholding dua with this idea (or any other) in mind is a serious mistake and we would be missing on the blessings of Allah.

It was narrated from Ibn ‘Umar (RA) that the Prophet (SAW) said:

“Dua may be of benefit with regard to what has already happened or what has not yet happened, so adhere to dua, O slaves of Allah.”

In a hadith it says:

“The decree cannot be overturned except by dua.”

Dua No. 7 Whenever one sits in gathering
According to Imam Ja’far-e-Sadiq (a.s.)

God has asked the son of Adam to remember Him in the gathering, which is a lot better than his gathering.

In another tradition the Imam (a.s.) has stated

The God has said that a person who remembered by Him in the gathering of Angles.

According to Imam Muhammed Baqir (a.s.)

A person who wants to give a full account and be rewarded on the Day of Judgement, should recite the following ayats (verses) wherever he sits in a gathering.

Translation:
Hallowed is thy Lord, the Lord of Majesty, far above from that which they ascribe (unto Him) And peace be upon the prophet. And all praise is God’s the Lord of the worlds.


Du`a’ (supplication) is an incredible power that many of us sometimes don’t fully
comprehend—because if we did, we would do whatever is necessary to get our
du`a’s answered.  Sometimes our du`a’s are answered
immediately and sometimes they take much longer than we expect. However, when
made properly, du`a’ can transform our lives and bring about miraculous
results.


In order to get our du`a’s answered we must fully comprehend the
dynamics behind du`a’. Firstly, we must have complete certainty
(yaqeen) that Allah subhanahu wa ta`ala (Glorified and Exalted
is He) will answer our prayer.  There should be absolutely
no doubt in our minds that Allah (swt) is listening to our du`a’s and
is capable of answering them. We must also be careful not to lose hope in
our du`a’ and become impatient when we don’t see the results we want.
We need to continuously remind ourselves that the key to getting our
du`a’s answered is by being persistent in our du`a’.  And
most importantly, we must make sure that there isn’t a sin we are committing
that we haven’t repented sincerely from, as our sins can be the first thing that
can get in the way of our du`a’s being accepted—especially if the sin
includes earning a living through unlawful means.


Once this is understood and followed, rest assured that Allah (swt) will
either give you what you want or something much better than it; and He will most
likely give it to you in a way that you never imagined.

Allah (swt) also says: “And when My servants ask you, [O Muhammad],
concerning Me—indeed I am near. I respond to the invocation of every supplicant
when he calls upon Me […]” (Qur’an 2:186)

Now, I would like to share a story that proves how powerful making
du`a’ can be; and how Allah (swt) can answer our prayers in the most
miraculous of ways. This story should be taken as a parable, rather than as
fact:


Dr. Saeed, a well-known doctor, was once on his way to an important
medical conference in another city in which he was going to be granted an award
for medical research he had recently done. He could barely contain his
excitement on his way to the airport and couldn’t wait until he arrived at the
conference. He had worked long and hard on his research and felt his efforts
deserved the award he was about to obtain. However, an hour after the plane took
off, the pilot announced that there was a problem with the plane and that they
were going to make an emergency landing at the nearest airport.


Afraid that he wouldn’t make it in time for the conference, the doctor
ran to the information desk as soon as the plane landed and explained to the
woman at the desk that he was expected to be at a very important conference and
that he needed to find another way to get to his destination. She told him that
there was nothing she could do to help him as there wouldn’t be another flight
to his destination for another sixteen hours; but suggested he rent a car and drive down to the city as it was only
three hours away. Having no other choice, the doctor agreed to the idea despite
his hatred for driving long distances.


The doctor rented a car and started his journey. However, soon after he
left, the weather suddenly changed and a heavy storm began.  The pouring
rain made it very difficult for him to see and he missed a turn he was supposed
to take. After two hours of driving, he was convinced he was lost. Driving in
the heavy rain on a deserted road, feeling hungry and tired, he frantically
began to look for any sign of civilization. After some time, he finally came
across a dark tiny cottage. Desperate, he got out of the car and knocked on the
door.


A small elderly woman opened the door for him. He explained his situation
and asked if he could use her telephone.  She told him that she didn’t have
a phone or electricity but that he was welcome to come in for some food and
something warm to drink as he had completely lost his way and that it would take
him some time to get back on the right road.  Hungry, wet and exhausted,
the doctor accepted her kind offer and walked in. The woman told him to help
himself to some food and hot tea on the table and then excused herself to finish
her prayers.


Sitting on the table sipping his tea, the doctor watched the woman in the
dim light of the candles as she prayed next to what appeared to be a small baby
crib. Every time she finished a prayer, she would start another one, and she
seemed to be engrossed in making du`a’ while in sujood
(prostration). Every now and then she would rock the crib gently.


Feeling that the woman might be in need of help, the doctor seized the
opportunity to speak as soon as she finished one of her prayers and told her
that he hoped Allah (swt) would answer her du`a’s.  He then said
that he noticed that she had been making a lot of du`a’ and asked if
there was something she needed that he could get for her or help her with. The
woman smiled and said that Allah (swt) had answered all her prayers except for
one. She said she didn’t know why Allah (swt) hadn’t answered this specific
prayer yet but perhaps it was because of her weak iman
(faith).


The doctor asked if she didn’t mind telling him what she was making the
du`a’ for. Nodding her head in approval, she said that the child in the
crib was her grandson and that both his parents had recently died in a car
accident. She said that the child had a very rare type of cancer and that all
the doctors she had seen were unable to treat him. She also said that she had
been told that there was a doctor who specialized in the type of cancer her
grandson had, but there was no way for her to get to this doctor as he lived
very far from her; so she has been spending her days and nights praying and
making du`a’ that Allah (swt) helps her find a way to get to Dr.
Saeed—the doctor who could treat her grandson.


Upon hearing her words, tears began to flow down the doctor’s cheeks and
he said: ‘Subhan’Allah (glory be to God), there was a malfunction in
the plane, a thunderstorm hit, and I lost my way; and all of this happened
because Allah (swt) did not just answer your prayer by helping you find a way to
get to Dr. Saeed, but he brought Dr. Saeed to your house. I am Dr. Saeed.’

With tears streaming down her cheeks, the woman raised her hands in
du`a’ and said: ‘Oh Allah, how great and merciful You are!’