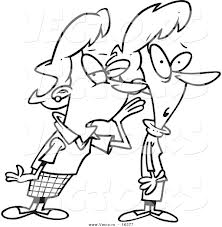 Faith calls upon us to bring out the best in ourselves and in others. Treating other people with integrity and respect is a sign of a believer. It is not permissible for a Muslim to spread rumors, gossip, or engage in backbiting one another.

Teachings of the QuranIslam teaches the believers to validate their sources, and not engage in conjecture. Repeatedly in the Quran, Muslims are warned about the sins of the tongue.“Do not concern yourself with things about which you have no knowledge. Verily, your hearing, sight, and heart -- all of them will be called to account" (Quran 17:36).

"Why do not the believing men and women, whenever such [a rumour] is heard, think the best of one another and say, “This is an obvious falsehood”? ... When you take it up with your tongues, uttering with your mouths something of which you have no knowledge, you deem it a light matter. Whereas in the sight of God it is an awful thing!" (Quran 24: 12-15).

"Oh you who believe! If a wicked person comes to you with any news, ascertain the truth, lest you harm people unwittingly, and afterwards become full of repentance for what you have done (Quran 49:6).

This literal definition of the word “backbiting” is something that we don’t often think about. The condemnation we give to the act of cannibalism is the same horror that we should feel when engaging in, or even speaking about, backbiting.Teachings of the Prophet MuhammadAs a model and example for Muslims to follow, the Prophet Muhammad gave many examples from his own life about how to deal with the evils of gossip and backbiting. He started out by defining these terms:The Prophet Muhammad once asked his followers, “Do you know what backbiting is?” They said, “Allah and His Messenger know best.” He continued, “Saying something about your brother that he dislikes.” Someone then asked, “What if what I say about my brother is true?” The Prophet Muhammad responded: “If what you say is true then you have backbitten about him, and if it is not true, then you have slandered him.”

Once a person asked the Prophet Muhammad to give him an idea of good work which would admit him into Paradise and distance him from the Hellfire. The Prophet Muhammad began to share with him a list of many good deeds. Then he said: "Shall I inform you of the foundation of all of that?" He took hold of his own tongue and said, "Restrain yourself from this." Surprised, the questioner exclaimed, "Oh, Prophet of Allah! Are we held to task for the things that we say?" The Prophet Muhammad replied: "Does anything topple people headlong into Hellfire, more than the harvests of their tongues?"

How to Avoid Gossip and BackbitingWe may say that we know all of this… yet backbiting and gossip remain the main causes of the destruction of personal relationships. It destroys friendships and families, and fuels mistrust among community members. Islam guides us in how to deal with our human tendency towards gossip and backbiting:ExceptionsThere may be some situations in which a story must be shared, even if it may be hurtful. Muslim scholars have outlined six situations in which one is justified in sharing gossip: